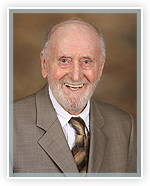 Not only was his experience a basis for winning many thousands of claims, but he was also the author of a 50 chapter book entitled, "How to Win Disability Cases". This book is currently in the process of being published.